In the program’s first year of existence, the team has never lost, including a romp at the Region 15 Championship Wednesday at Cove View Golf Course in Richfield. Up next for the Spartans is the state championship on Tuesday.

As for what to expect, Coach Tom Hansen said he is just as clueless as his players.

“None of us have been to the tournament,” he said. “We are flying by the seat of our pants.”

With just one senior on the team in Sidnee Condor, the rest of the team is made up of all freshman and one sophomore. Youth and inexperience has yet to affect the players as they have cruised through the regular season and region tournament unblemished.

The Spartans scored a tournament high 222 to win region, their highest score of the season. Grand finished in second with a 178 and San Juan came in last with 172. Sydnee Guymon scored a match-high 64 and was named the top golfer in Region 15. Taijah Price came in second in the match with a 61.

“To win it, I think we will need to shoot 240,” he said. That would be the highest score of the year for the Spartans. Playing in “super windy conditions” during the region meet, in which his team recorded a season high, Hansen thinks 240 is very attainable.

The top two teams in each region will compete in the tournament, while competitors with similar season average nine-hole scores will battle against each together in groups of 3-4.

Though the Spartans are still in their first year of competition, it would be hard to bet against them.

Sponsors for this year’s team are Emery Telcom and Desertview Federal Credit Union. 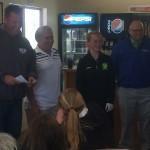 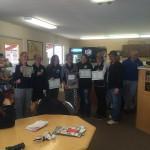