Several tiebreaker rounds were needed to determine Ferron Elementary’s Spelling Bee Champion. The rules state that a speller must be the only one to spell two words correctly in tie breaker rounds in order to be the winner. Carson Childs and Maddex Behling went several rounds before Maddex edged out his opponent.

Behling became not only the school winner but also the first place in the sixth grade contest. Carson Childs was first in the fifth grade and Grace Bernard captured the honors in fourth grade. The contest started with 18 students participating, three from each of the grades; fourth, fifth and sixth.

The end of the 11th round found three students who had not missed a word. The contest then went into tie breaker rounds. It was then that the two older boys continued to battle for first place. Mr. and Mrs. Dean Nelson, Mrs. Blackburn and Mrs. Singleton judged the event, which was conducted by teachers, Mrs. Nielsen and Mrs. Jorgensen. 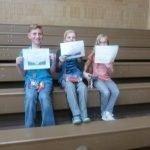