Chairman Anderson and Vice-Chair Crane assured fellow Republicans that they are working hard to pay off the large debts they have inherited as new State GOP Officers.  Chairman Anderson stated, ”We cannot afford to lose another dime. We plan to operate on a cost neutral basis.”

Vice Chairman Crane wanted to give a message of hope.  She said the party is operating with a strong sense of duty.  The new state officers are proponents of the caucus and convention system.  She also prefers to pay the debts to the little bills first and then bite of the big ones as they can. She concluded, “The Republican platform is full of principles and debts must be paid,”

Representative Albrecht congratulated Emery County on the Governor’s choice of an Emery County girl, Paige Peterson, as a Utah State Supreme Court Justice.  He stated his appreciation of working with Sen. Hinkins on several committees in the state legislature.  Albrecht assured he represents rural values and wants to get “the best bang for the buck”.

Senator Hinkins  spoke of the importance of the recent merge in the coal industry of Murray Energy and Bowie Resources.  He spoke about the possibility to be able to export coal in the Oakland Bay area.  He also addressed the chances of moving some government offices to rural Utah such as the Forest Service, Bureau of Land Management and CIB. He feels that his appointments as chairman of several committees in the Senate gives him the opportunity to work for rural Utah.

Commissioner Wilson spoke about how he is beginning to feel the weight of the commission job in the months since his appointment. He spoke of the decrease of mineral lease monies from $3.1 to $1.1 million in Emery County which means they must be very frugal as a county.  The current commissioners want to leave the county in as good a shape as they found it.  “ It is not who’s right, but what is right,” he stated.  He said he loves the county and the flag which represents the government and the people. 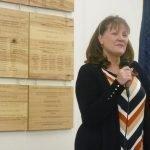 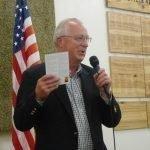 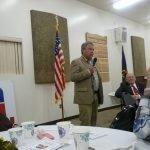