Vernal — Colorado River cutthroat trout are a fish prized across Utah. And a great place to catch them is the High Uinta Wilderness in the Uinta Mountains in the northeastern part of the state.

Unfortunately, habitat loss, coupled with cutthroats breeding with and competing with trout not native to the western United States, have caused dramatic declines in cutthroat trout populations across the West. That, in turn, has led to concerns about the species’ future. To reduce the chance that cutthroats are listed under the Endangered Species Act, biologists with the Utah Division of Wildlife Resources (DWR) and the U.S. Forest Service are planning to treat waters in the High Uintas Wilderness to remove nonnative fish. Once the nonnative fish are removed, cutthroat trout will be reintroduced to the streams and lakes.

A final Environmental Impact Statement (EIS) for this proposed project has been prepared and will soon be available for public review. The document reviews potential effects to users and resources in the proposed project area and evaluates whether the project should proceed. If approved, the project will remove nonnative brook trout in four drainages on the South Slope of the Uinta Mountains. The treatments would occur from 2022 to 2034.

Tonya Kieffer-Selby, regional conservation outreach manager for the DWR, says even with the treatments, anglers will still have hundreds of miles of high Uinta mountain streams to fish for brook trout and other trout species. “Brook trout will still be stocked in many of the same places,” she says, “just not in the four proposed project watersheds.”

Trina Hedrick, regional aquatics manager for the DWR, says for now, biologists will focus their initial efforts on the Sheep Creek drainage on the North Slope of the Uintas. Even though the proposed projects for the South Slope wouldn’t start until 2022, she says it’s time to start the planning process. “Logistically,” she says, “the treatments will be very challenging.”

How treatments will occur

Once the EIS is finalized, the DWR, in partnership with the Ashley National Forest, will chemically treat designated streams—and a few lakes—with rotenone. The treatment will remove brook trout that have established themselves in the proposed project area.

Rotenone is a natural substance that comes from the roots of a tropical plant in the bean family. It’s a piscicide (substance poisonous to fish), but it’s not dangerous to people, pets or other wildlife, especially in the extremely low quantities biologists will use to treat the streams.

After all the treatments are complete, cutthroat trout will be restocked during the fall. Two to three years after the treatment is over, the cutthroats will be big enough for anglers to catch.

Waters to be treated

Here are the proposed project areas including stream miles and lake surface acreage:

“We recognize some anglers target these locations for brook trout,” Hedrick says, “but we had to pick large expansive areas that had natural barriers to prevent re-invasion and to ensure cutthroat trout would survive. This is an opportunity to restore Colorado River cutthroat trout in their native range, protect the species in Utah and provide anglers with dedicated areas to fish for them.”

If you have questions about the treatment, call the DWR’s Northeastern Region office at 435-781-9453. 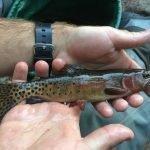 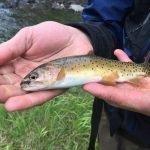 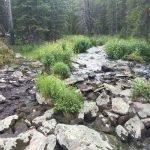