Students at Creekview Elementary benefit from the STEM (science, technology, engineering and math) education program throughout the year. This month, students participated in a CANstruction activity.

The STEM event was made possible by canned food that was gathered by students at Creekview. Over 1,000 cans were collected this year and will be donated to the Carbon County Food Bank.

However, before donating the food, students decided to have a little fun. Each classroom had the chance to CANstuct something with the donated cans of food. Afterwards, two groups were formed to participate in a larger project.

One group, led by Spencer Loveless, made a mushroom and a snake slithering by during their CANstruction activity. Another group, which was led by Ken Williams, made a dog house along with two dogs for their project. Each group consisted of a parent volunteer and 10 students from different classes. 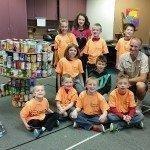 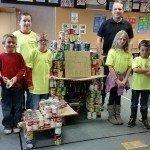