At the spelling bee, J. J. Grant, SESC Director, welcomed parents and students and explained the rules of the competition. Mr. Grant pointed out that the Service Center makes every effort to be accurate in adjudicating the bee, providing two judges (Johnna Boyack and Cynthia Grant) and a tape recording in the event of a dispute. Grant turned the bee over to Chas DeWitt, principal of ARL Middle School in Blanding, who was pronouncer for the event.

The fourteen competitors lined up, having drawn numbers prior to the bee to determine order of spellers. The words were announced in order as listed in the Spelling Bee booklet published by the E. W. Scripps Company, sponsors of the national bee.

Students had studied diligently and were well prepared, but gradually the field was pruned to the three finalists by the end of round seven. Bryner, English and Curtis battled it out until both English and Curtis misspelled a word in round 20. Bryner was then asked to spell “fraulein,” his championship word to clinch first place. The girls had both misspelled their words for round 20. Curtis was given “blasé” but misspelled it. English correctly spelled “facetious” and then was required to spell an additional word, “dahlia,” to claim second place.

Top three winners each claimed trophies for their efforts. In addition to the trip to the national bee, Bryner was also given a Webster’s Third New International Dictionary donated by Merriam-Webster, the 2015 United States Mint Set donated by Jay Sugarman, CEO of iStar Financial, and a one year membership to Britannica Online Premium donated by Encyclopedia Britannica. English and Curtis were each given a $25 Amazon gift card donated by Southeast Education Service Center.

The National Spelling Bee has a long history, having been organized by nine newspapers collaborating in 1925. The Deseret News sponsored a state bee for many years but now winners from the regional bees compete directly at the national bee. In 1941, Scripps took over sponsorship of the national bee. There was no national bee during war years of 1943-45. Co-champions were declared in 1950, 1957 and 1962. Last year, two spellers were crowned co-champions when they exhausted the list of spelling words without a mistake. Of the 91 champions, 47 have been girls and 44 have been boys.

The program experienced steady growth between the 1920s and the 1970s, and between 1980 and 1990 the number of participants doubled. In recent years the program underwent a second growth spurt, and a significant surge in popularity, thanks to live coverage on ESPN.

Now, it’s time to wish Bryner good luck on his way to Washington, D. C. and a more rigorous competition. At the 2014 Scripps National Spelling Bee, all 281 spellers took the Preliminaries Test. That test contained 12 score spelling words, 12 score vocabulary questions, a round two vocabulary question and a round three vocabulary question for a total potential score of 30 points. Additionally, spellers who spelled correctly on stage during rounds two and three of the bee had an opportunity to earn an additional three points for each correct spelling. Here’s the catch: If a speller misspelled in either round two or round three, the speller was eliminated from the competition. A total of 46 spellers qualified for the semifinals by earning at least 28 points in the preliminaries.

Interested parents and students can find more information about the national bee at spellingbee.com and are encouraged to begin now to prepare for the next year’s competition. 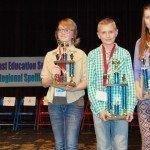 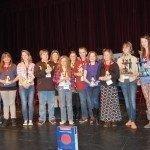 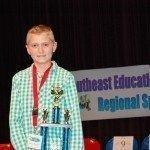