Six students from each 4th, 5th and 6th grades competed in the National Geographic Geography Bee at Ferron Elementary Tuesday afternoon. After seven preliminary rounds the field of contestants narrowed to 9 students.  These students then competed in three semi-final rounds and the field was cut to 4.

After the final round Courtney Behling became the Geography Bee Champion, with Anne Stevens as runner-up. Behling will now take a test to determine if she can continue to compete on the state level in the spring. 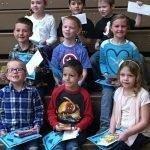 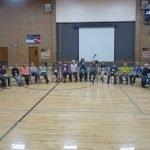