According to the Utah Highway Patrol, at approximately 2:42 p.m. on Sunday near milepost 273 on SR-6 in Emery County, a 2006 Audi was eastbound on SR-6 when the male driver got distracted after he dropped his phone. As the driver leaned down to retrieve the phone, the Audi drifted across the double yellow lines and sideswiped a 20 foot double axle trailer that was being towed by a pickup truck.

The Audi spun around and collided nearly head on with another passenger car. The third passenger car was driven by a female in her 20s.

The female in her 20s was trapped in the vehicle and then extricated. She was transported via an air medical unit to a northern hospital in critical condition. Another female in her 40s in the third vehicle was transported via ground ambulance. The two occupants in the Audi were uninjured. The Audi caught fire and fire units were on scene to put the fire out. All occupants in the pickup truck were uninjured. 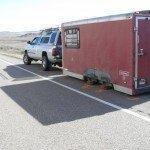 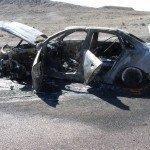 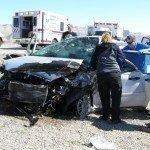