Cleveland native Erin DeeAnne Hurst was recently diagnosed with Alvaro Rhabdomyosarcoma, a rare cancer. This diagnosis was given to Hurst, who is just 21 years old, on July 10 and was quite a shock.

Hurst is the daughter of Frank and Tara Hurst and grew up on her Grandpa Sherrel’s farm, which she loved. She was also a three-sport athlete while attending Emery High School, competing in basketball, track and cross country. Hurst excelled at running and earned an athletic as well as an academic scholarship to Dixie State University.

During the summer, before her diagnosis, Hurst was also accepted into the physical therapy program.

Hurst will be undergoing chemotherapy as well as surgeries to attempt to remove the cancer. On Aug. 3, the community is invited to wear blue in support of Hurst and her fight. A GoFundMe page has also been established where donations are being accepted.

Other local causes, such as fundraisers, are in the works to also assist Hurst with medical bills and other needs as she fights the good fight. 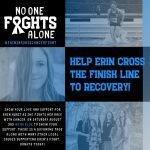