For several months, agents from the Carbon Metro Drug Task Force have been investigating the drug pushing activities of Amber Hafer, DOB 4-9-85, a resident of the Price area. Agents determined that Ms. Hafer has been living in, and dealing from unit #132 of the storage sheds located at 2750 S Hwy 10, south of Price. The storage units are not zoned for residential living.

On 11-6-15 agents were in the process of obtaining a search warrant from the 7th District Court. Meanwhile the unit was under surveillance by Price City Det. Sergeant Brandon Sicilia, and Ms. Hafer was observed leaving the unit and heading towards Price. Through coordinated efforts, Ms. Hafer was intercepted by Price City Police Officer Brandon Ratcliffe at 2100 and was detained and returned to the storage unit. The search warrant was served on Ms. Hafer by Agent Stephen Regruto at 2112. Task Force agents and Price officers were assisted by Carbon County Deputies, and Chief Deputy Cletis Steele assisted Agent Regruto with the actual search.

Ms. Hafer was found to be in possession of 15.8 grams of methamphetamine, 6.1 grams of heroin, 27 grams of marijuana, and items of paraphernalia including baggies, syringes, spoons, scales, and drug pipes.

Ms. Hafer was booked into the Carbon County Jail on felony charges of Possession With Intent to Distribute Methamphetamine, Heroin, and Marijuana, as well as a misdemeanor charge of Possession of Paraphernalia. The Carbon County Attorney will screen the report to determine what formal charges to bring.

Ms. Hafer has 13 prior arrests. Her arrests include assault, paraphernalia, retail theft, and drug offenses. 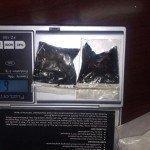 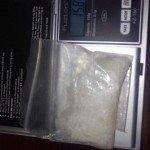