SALT LAKE CITY August 18, 201 6- In cooperation with the Carbon County Attorney’s Office, the Utah Attorney General ‘s Office announced the arrest of Thomas Edward Egley for charges of rape and murder of Loretta Jones on or about July 30, 1970. In 2009, Sergeant David Brewer with the Carbon County Sheriffs Office reopened the case at the request of family members of the victim. Sergeant Brewer recently obtained Egley’s confession to raping and killing Jones and destroying evidence that would link him to the crime.

“We’re grateful for the hard work that Carbon County investigators put into solving this 45 year old cold case,” said Attorney General Sean Reyes. “I hope this arrest brings some measure of closure to the family, even after all these years.”

“The community of Carbon County, particularly the victim’s daughter who was four years old at the time, can finally find solace in knowing Loretta Jones’s family will have the justice they deserve resulting from the tragic death of Ms. Jones some 45 years ago. Sergeant Brewer and Detective Hendricks from the Carbon County Sheriffs office should be commended for their efforts”, said Carbon County Attorney Gene Strate.

The investigation and arrest is the culmination of nearly seven years of work on the cold case by Carbon County investigators, nearly 45 years after the events occurred. The State of Utah extends a special thank you to Supervisory Deputy U.S. Marshal and the U.S. Department of Justice United States Marshal‘s Service for coordinating an expedient and safe apprehension of Mr. Egley where he resided in Colorado, upon the issuance of the $1,000,000 arrest warrant. Mr. Egley now awaits the extradition process in Colorado before being returned to Utah to face his rape and murder charges.

***The charges contained in the Warrant of Arrest are merely allegations, and the defendants are presumed innocent unless and until proven guilty. All factual recitations are derived from documents filed in court and statements made on the record in court.*** 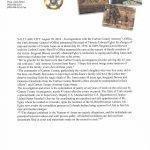