Carbon swim recently met with cross-county rival Emery as well as American Leadership Academy and North Sanpete on the Dinos’ home turf.
The Lady Dinos took off with a win in the 200 medley relay. The winning team consisted of Megan Swasey, Veronica Ibanez, Sadie Crompton and Amanda Liu with a time of 2:09, nine seconds ahead of Emery’s relay team. Carbon also represented with a fourth place finish with Emily Jespersen, Alheli Pendleton, Kacee Barrett and Elly Cowdell finishing with a time of 2:28.

The Dinos fell to Emery to start things off in the 200 medley relay with a second-place finish from the team of Tyson Swasey, Josh McCourt, Rylan Chamberlain and Kinnion Lyman, coming in with a time of 2:00. Carbon also received a fourth place finish from Matthew Torres, Jackson Rosier, Parker Humes and Dallen Twedell.

Dino Veronica Ibanez swam her way to a first place finish in the 200-yard free, beating Alexis Johansen of Emery with a time of 2:20. Teammates Emily Jespersen and Abby Layton were not far behind, finishing in third and fourth.

Tyson Swasey raced his way to a second place for the Dinos, coming in behind Garrett Stilson of Emery. Comrade Chad Laursen came behind Swasey with a third-place finish.

Dinos Amanda Liu and Shannon Baker swam a hard 50-yard freestyle to receive first and second place. Rylan Chamberlain had tough competition in the 50 free but fell short of a first-place finish to Nate Gilbert of Emery. Kinnon Lyman was also in the pack with a fifth-place finish.

Sadie Crompton of Carbon flew past her opponents in the 100 yard butterfly to earn a first place with a time of 1:16. Kacee Barret fell short of second place by two seconds as Kaelee Hooley of Emery took first. Chamberlain mingled his way to third place behind first-place finisher Kelden Guyman of Emery.

Lady Dino Ibanez delivered once again in the 500 free with a first place with Abby Layton coming behind Ibanez, snagging a fifth-place finish. The Carbon boys struggles continued in the 500 free has Dallen Tweddell swam his way to a fourth place finish behind Emery’s Levi Olsen.

The 200-yard relay team was strong for Carbon and continued the pace to secure second place with the team consisting of Sadie Crompton, Shannon Baker, Kacee Barret and Ashlin Baker. The boys tried to grab and first but came up short with a third place with Kinnon Lyman, Chad Laursen, Real Gu and Tanner Martinez representing.

The 100 yard back brought success for the Dinos with Megan Swasey snatching a second and Shannon Baker securing third. Taycie Davis and Vanessa Manual also helped the Dinos in the ranks.

Crompton came back for a first in the 100-yard breast with Pendleton once again coming in just behind Emery. Lyman represented the boys with a sixth-place result.

The girls continued their success in the 400 yard relay with a first place defeat with Ibanez, Swasey, Jesperson and Liu and pushed the girls to a first place over Emery, America Leadership and North Sanpete.

The boys’ competition saw Emery finish in the lead followed by Carbon just behind. 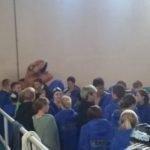 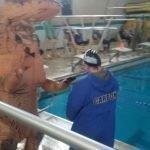 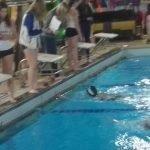 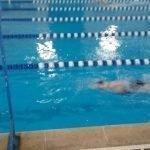 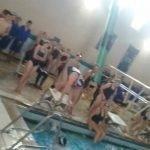 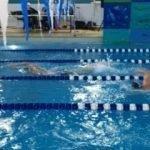 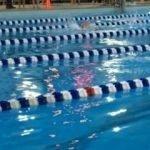 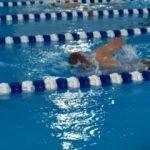 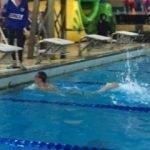 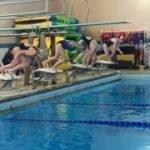 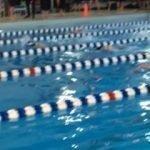 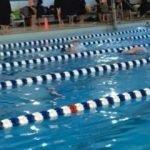