The parade, which will take place in early December, is Helper’s 25th celebration as Utah’s Christmas Town. Holley explained that along with the events that will already take place for this year’s celebration, the Tony Basso Group wants to help to make the event even more memorable.

Now, after a generous donation, the Tony Basso Group is working to organize a synchronized light show that will take place during the parade. Helper business owner Cindi Curry is also helping raise funds for the two-day spectacle.

“We’ve got to make the 25th year bigger and better,” Holley explained.

For this year, parade coordinators are planning on hiring an outside entity to put on the synchronized light show. The show will consist of lights and music on Helper Main Street before, during and after the parade. Council members agreed that the addition to the light parade was a good idea and will work with parade coordinators to make the show a reality.

Discussion was also had about the possibility of rewarding Helper residents with prizes for displaying their Christmas spirit with their homes. An idea of people being able to vote for their favorite house through social media was also discussed. No firm plans were made regarding the Christmas spirit competition, but the idea remains a possibility for the town of Helper.

See below for a list of events for the Helper Utah’s Christmas Town celebration. 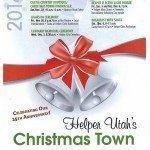