Fourteen years old. Most boys this age are busy riding their bikes, meeting up with friends or cozying up in front of the television to test out the latest and greatest video game. However, more than 40 years ago, local businessman David Dickey was busy finding his career.

At the tender age of 14, Dickey attended a Wurlitzer piano conference. The year was 1971 and from that point, he knew that his career was going to revolve around music.

“It was like a religious experience,” Dickey said. Fast forward to the present and Dickey’s teenage dream has become a reality: Lee’s Music in Price is celebrating 40 years in business.

“We’ve inspired thousands of people to bring music into their home,” Dickey explained. “I’ve had a dream job.”

While some might think after 40 years the Dickeys have the business ironed out and can rest easy; the opposite is true. David and his wife Linda only survive today because of the constant evolution and growth of Lee’s Music.

Growing up in a family where each member had an active role of music in their lives, David got his love for music at a young age, courtesy of his mother. This love grew throughout the years until he eventually set his sites on his ultimate goal of owning a piano store.

Shortly out of high school and on his way to a mission for his church, David’s dream was spurred by his father. As a coal hauler that frequented trips through Price, David’s father spotted a space available on Price’s Main Street. Before the end of the year, the Payson native fresh out of high school moved to Price and opened the doors of Lee’s Music with his parents.

“It was crazy,” David remembered. “We had success from the beginning.”

With initial success under his belt, David made his way to New Zealand to serve an LDS mission, leaving Lee’s Music in the hands of his parents. His mom set up in the back of the old store, living in and running the store full time.

Upon returning from his mission, David knew he wanted to take on the responsibility of his dream completely. So, still a young man in his 20s, David bought his parents out of the business during a well-known struggling economy. David would soon take on another partner, this time it was in the form of his new wife, Linda.

“We would have never made it out of the 80s without Linda,” David said.

The two have dedicated their lives to Lee’s Music, not slowing down despite drastic downturns in the piano industry. The Dickeys constantly adjusted to the changes, taking them in stride and finding new ways to fit customers’ needs. Whether this meant selling Baldwin clocks in the 80s or expanding to five different states, the Dickey family has ensured that Lee’s Music kept its doors open on Price’s Main Street.

“We are a dying breed of business and every time we lose a business like this, our area hurts,” said David. “This is the store that shouldn’t be here but this piano store is around because we work our guts out and we love what we do.”

Industry leaders also see the passion that stands behind Lee’s Music. In 2015, Pearl River Piano Group, the world’s leading piano manufacturer, named Lee’s Music as the winner of the “Outstanding Dealer Award” for the year. David was presented with the award at the Music Industry International Convention in California for his business’ sales performance.

David has been similarly recognized from other entities, serving on various boards and mentoring other business owners in their own endeavors.

“We absolutely adore what we do,” David said. “That’s why it works.” 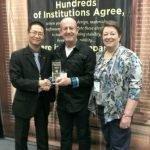 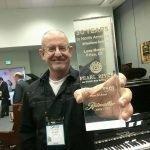 In 2015, Pearl River Piano Group, the world’s leading piano manufacturer, named Lee’s Music as the winner of the “Outstanding Dealer Award” for the year. 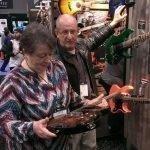 David and his wife Linda browse during a convention. 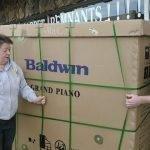 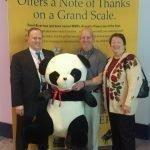 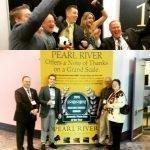 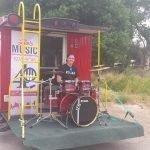 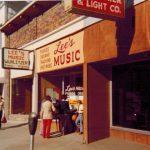 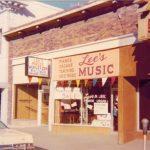