Taylor Cook has been hunting deer since she was 8 years old. By the time she was 12, she had killed four deer. Your first impression might be that that is illegal, but not if you lived in Kentucky.

Taylor moved to Kentucky when she was seven and hunting regulations are a lot different than they are in Utah. In Kentucky, there is no age limit for hunting. If you can handle a gun safely, you can get a license. At a very young age, Taylor began asking her father, Greg Cook, CFO at Castleview Hospital, when he would take her hunting. Greg didn’t take Taylor seriously and would reply as most fathers would, that he would take her “someday”. Each year her request grew more intense until Greg finally realized that she was serious about the matter, and a date was set. They bought her a gun and a license and she began her coaching.

At the age of 12, Taylor moved to Price, Utah where her interest and love for hunting expanded past deer. She now wanted to hunt for wild turkey! Taylor got a turkey tag and her and her father headed for Ashley Creek in Vernal. The morning began early. As Taylor and her father began calling, it took no more than an hour before two hens and three jakes appeared. Taylor was so excited to see the birds 30 yards away. She knew as any pro would, that now was her chance. Taylor shot and tagged her first wild turkey!

“Taylor is just a natural with a gun. When she says she is ready to shoot, there is no question that what is in her sights is in serious trouble,” said her father Greg. “For her next adventure she wants to hunt for wild turkey in Kansas or Nebraska. Taylor might sound like a tomboy, but she is very much a girly girl. She recently made the cheer team at Mont Harmon Junior High, but her first love is to hunt! 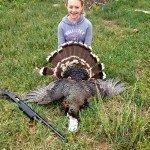 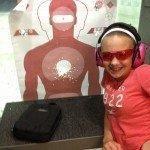