Danielle Howa Pendergrass is a name that is well-known in the Carbon and Emery communities, especially by the women that revere her expertise that is given through Eastern Utah Women’s Health.

Howa Pendergrass has taken that expertise further, working to give Utah teens needed information through a sex education program that she launched in 2020 called the Eastern Utah Teen Council. This was created following years of requests to Howa Pendergrass to educate patients’ teens as they were worried that classrooms were not properly teaching the subject.

Now, Howa Pendergrass works with Tomi Lasley, program facilitator, to provide teens with accurate information regarding sex and healthy relationships along with leadership, speaking and teamwork skills. Since its inception, the council has worked to educate teens and give them an inclusive space.

The council meets often with group activities such as a Sex Ed Trivia Night, presentations on topics such as healthy relationships, discussions by teens for teens and more. The program has gained traction in a short time, garnering interest from Scientific American and the Salt Lake Tribune.

When speaking on the program, Howa Pendergrass stated that she would never have thought of coming into a community and beginning a program that seemed unwanted, but that it came from listening, being asked and seeing the problems that arise from not having these discussions. The council gives viable information to teens that likely would not receive it otherwise. In turn, those teens share this information with their peers, creating a ripple effect.

Many of the topics, such as consent, are not included in the state’s health curriculum, which currently stresses abstinence. Lawmakers have voted against updating the sex education curriculum to include more information about resources and strategies for two years.

Howa Pendergrass stated that she could not wait for change to come from public education; it needed to happen now. While she hopes that the curriculum will evolve in the future, she understands that local youth need this information now, especially since many of them aren’t learning about sex and relationship at home either.

Those that are interested in the Eastern Utah Teen Council may find more information by visiting the council’s Facebook page. Upcoming events, discussions and more are featured on the page, which is kept current by the council.

In addition, the Eastern Utah Teen Council is currently recruiting for the 2022-23 school year. The council is open to teens in 10-12 grades and each member will receive a $200 stipend per year. For more information, please see the flyer below. 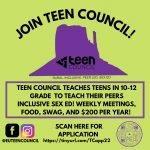