The Carbon County Chamber of Commerce’s meeting for the month of October took place on Thursday afternoon at Ascension St. Mathew’s Church in Price.

During this meeting, the business spotlight of the month was announced as Eastern Utah Broadcasting by chamber vice president Robert Oliver. The company has been in business for 80 years. Paul and Ann Anderson, company owners, spoke at the meeting. They thanked the community for the continued service and stated that it has been an honor to serve for so long.

The Anderson’s are the third generation of the same family to run the business. According to the duo, it is believed that they are one of the few stations in the country that is still under the same family ownership for three generations.

Also presented during the meeting was a new addition: the Community Service Spotlight of the Month. This was announced to be the Ascension St. Mathew’s Church. Pastor James Locke accepted the award and thanked all in attendance.

“I have never been in a community that has made me feel more welcome,” Pastor Locke stated.

The pastor then went on to encourage the community to come to service. He is working hard to bring interdenominational worship to the church. The money that was raised during the church’s Fall Fare, he announced, will go toward community service.

During the meeting, the Utah candidates for the upcoming election were each given five minutes to introduce themselves and explain what they will do for Utah, if elected. 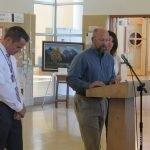