Emery County Historical Society members recently gathered at the Museum of the San Rafael to hear the story of the Huntington mammoth discovery.

Speaker Dawnette Tuttle talked about the discovery of the Huntington Mammoth. She was at the site watching as State Paleontologist David Gillette and others were sifting through dirt. Tuttle remembers how she really wanted to help but they would not allow her to. She had a video camera in her vehicle and asked if she could film and photograph to document the work. They said as long as she stayed out of the way it would be alright.

When Tuttle returned home and showed the video to her father, he said that she should do something with it. It was decided that she would narrate and copyright the video. She shared that video with the Emery County Historical Society members on Thursday, Jan. 22.

Clifford Oviatt explained to the members how he created the mammoth exhibit at the Museum of the San Rafael and the mural he painted.

The evening ended with refreshments and the members were allowed to visit the exhibits in the museum. Also at the event, those in attendance enjoyed a a singing performance by Holly Jorgensen, who was accompanied by Margaret Fielding. 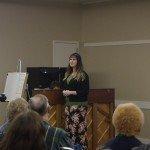 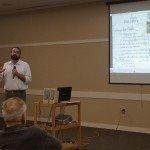 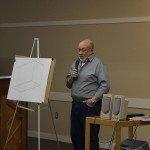 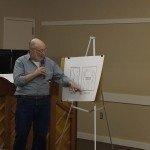 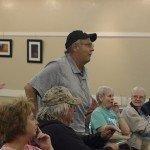