On Thursday morning at 4:24 a.m., three male individuals stole nearly 20 flags of various countries from the perimeter display at the Price City Peace Garden on Main St., which were part of the display for the opening ceremonies of the annual International Days celebration in Price.

Sgt. Brandon Sicilia, Det. Chris Pugliese, and Officer Jon Bowen began investigating the case. The officers were able to identify the suspect’s vehicle, and the suspects. Security camera footage provided ample documentation of the vehicle, the suspects, and their actions.

The flags had been disassembled from their flagpoles, but were otherwise recovered intact with the accompanying hardware. In addition, other flags allegedly stolen from past years were recovered, as well as at least one stop sign.

Two male juveniles ages 16 and 17 both from Price, were booked into detention for class A misdemeanor theft, class B conspiracy, curfew violation, and the 16 year old has an additional violation of his previously established probation issue. They will be referred to Juvenile Court.

Devon W. Powell, DOB 7-15- 91 of Price, was booked into the Carbon County Jail for class A misdemeanor theft, class B misdemeanor conspiracy and class B misdemeanor contributing to the delinquency of a minor. The city attorney will review the reports to determine what formal charges to file in court. Powell has two previous arrests, one for possession of marijuana and paraphernalia, and one retail theft, with both resulting in convictions. 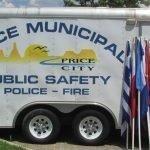 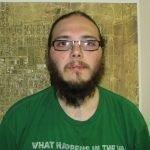