At the December meeting of the Carbon School Board, KUSA gave out three Apples for Teachers awards, covering the first three months of the school year. The radio station gives out awards each month and then at the end of the year, the winner that is picked from that year’s monthly awards receives an Apple iPad.

At the meeting, one of the awards went to Terry Tubbs, a teacher at Carbon High School who was nominated by Saul Beecher. Tubbs teaches economics and business management along with being the adviser for the Future Business Leaders of America organization at the school. She is also the Sterling Scholar adviser.

The next award went to Michelle Fidell, a language arts and social studies teacher at Helper Middle School. She was nominated by Tiffany Kinder for her hard work and dedication to students.

The final award was somewhat unusual in that it went to the principal of Creekview Elementary, John Thomas. Thomas has been instrumental in moving the school toward becoming a recognized STEM school by the state. He was nominated by Vickie Leo. 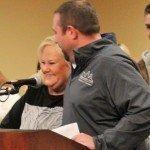 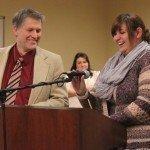 KUSA’s Amanda Holley speaks about the award she is about to give, as John Thomas listens