If you are like many people, you aren’t looking forward to “springing forward” and losing an hour of sleep on Sunday during the switch to daylight saving time. While the evenings will have more light, the mornings will be darker, which means a lot of Utahns will be commuting during lower-visibility hours.

During the winter, there is an increase in wildlife along the roadways, primarily due to big game animals migrating to lower elevations in search of feed, according to Daniel Olson, wildlife migration initiative coordinator for the Utah Division of Wildlife Resources (DWR). The migration period for deer is typically April and May, and then again in November which, coincidentally, is when the highest number of vehicle and deer collisions occur, Olson said.

“The peak time to hit deer is around November,” Olson said. “It coincides with mating season and the migration. Animals are crossing more roads during the migration, and male deer move around a lot more to find mates.”

According to a DWR study, there were approximately 10,000 wildlife/vehicle collisions in 2012, Olson said. However, he estimates those numbers are lower now due to an increase in fencing and wildlife bridges that have been installed along migration routes across Utah highways.

Olson said deer are more active early in the morning and in the evenings, which coincides with busy commuting hours. This is also when low-light conditions make it difficult for drivers to see.

How to avoid wildlife collisions

As daylight saving time begins, here are some tips from Wild Aware Utah to help you avoid wildlife collisions:

If you see an animal near the road, here are some additional suggestions:

What to do if you hit an animal 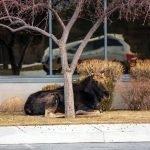 You never know where moose will show up in the winter. This one bedded down in Provo in 2016. 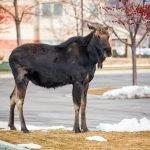 You never know where moose will show up in the winter. This one visited Provo in 2016. DWR biologists shot it with a tranquilizer dart. It’ll be asleep soon. 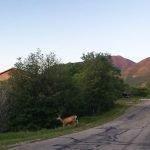 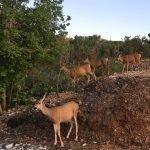