Debbie Marvidikis with the Southeastern Utah Health Department visited the C.A.R.E Coalition during its Thursday afternoon meeting to request a letter of support regarding changing the policy of tobacco purchases in Carbon, Emery and Grand counties.

For the past several years, each time the county health rankings are released, the three counties of Carbon, Emery and Grand all score poorly in comparison to the rest of Utah, Marvidikis explained. One major reason is tobacco use in any form. The use of tobacco allegedly links to opiate abuse, sexual and domestic violence, teen pregnancy, suicide, obesity and more.

One major positive highlighted in the note was that it has been demonstrated that the longer an individual can abstain from using tobacco, the more resistance they have to addiction and other risky behaviors. The passing of this regulation would mean that it would be illegal in the three-county area to purchase tobacco products before the age of 21.

Similar proposals in Utah have been made and Tobacco 21 has been passed in over 320 cities and counties throughout the country. This can decrease smoke rates, diabetes and arthritis, and increase the life span of those that do not become addicted at a young age.

Marvidikis stressed that this is only the beginning of the process. If the county or board of health passes the regulation, a year will be spent education and offering classes to prepare the county for such a great change.

However, she said that cigarette consumption, chewing and the other traditional forms of tobacco use are not the only issue. Recently, it was discovered that 34% of the youth in the area are vaping, where three years ago that percent was at zero. Marvidikis stated that the letters of support will add to the portfolio she will present on Nov. 27.

The C.A.R.E Coalition made the decision to write and sign a letter of support for Tobacco 21. 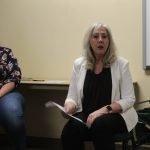 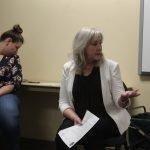