For the first Carbon County Tourism Super Service Award of 2020, things were handled a bit differently as there were two individuals nominated together and chosen by the hospitality committee to receive the award for January. Tina Henrie, Carbon County Tourism Specialist, gave this award at the county commission meeting on Wednesday.

Brenda Deeter began selling hot chocolate for the Carbon County Chamber of Commerce over 25 years ago during the Helper Electric Light Parade. One year, she volunteered at the chili dinner, where she was asked by the mayor at the time to volunteer the following year as well. This led to Deeter being in charge of the chili dinner ever since.

Deeter is known as the lady behind the scenes who has worked tirelessly to bring joy to those that attend events for Utah’s Christmas Town each year. However, Deeter does not accomplish it by herself. Her fellow nominee was her partner for the festivities, Mark Montoya. He has been volunteering at the parade since high school. He became the parade chair back in 1998 and has held the title for the past 21 years. Montoya and Deeter are the two leaders of Utah’s Christmas Town, joined by family and volunteers.

“We are truly grateful as a community for their efforts and dedication to not only all the Utah Christmas Town events, but for the experiences and memories they help families to make from all over the states,” Henrie remarked.

Henrie concluded by thanking the duo for continuing to bring happiness to the community and visitors. 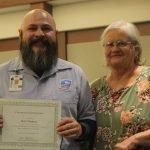 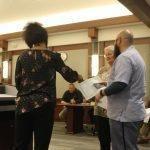