Local students at Creekview Elementary and Helper Middle School joined over 50 schools in Utah on Jan. 7 to welcome rainbow trout eggs to their respective schools. Both schools are participating in a program where students hatch the tiny eggs and raise the fry until they can be released in local community ponds.

A national program called Trout in the Classroom hosted by Trout Unlimited facilitated the arrival of the eggs from Utah hatcheries in conjunction with the Utah Department of Natural resources.

Along with the responsibility of caring for the eggs and young fry, the students learn about life cycles, ecosystems and chemistry. The tiny creatures have to be cared for on a daily basis. The students test the water for ammonia daily, using test tubes and discerning if the resulting water color changes indicate a need to replace part of the water in the tank to lower the ammonia level in the tank. Cooperation and critical thinking skills are used to make a decision.

About two weeks after the eggs hatch, the yolk sac they are born with is gone and the fingerlings need to be fed four to five times a day. A schedule is prepared with every student having an opportunity to feed the delicate creatures.

Subsequent lessons include identifying the various species of trout. The students learn that rainbow trout are not native to Utah like the cutthroat trout. Brett Prettyman, Intermountain Communications Director for Trout Unlimited, explains that they are still the most stocked fish in Utah and have a higher survival rate in hatcheries, which makes them a good match for this program.

In May, the schools will release the fingerlings into the pond at the Carbon County Fairgrounds and Gigliotti Pond in Helper. 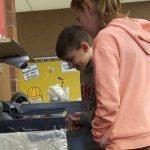 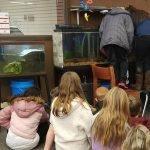 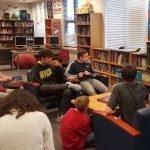 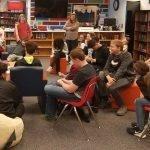