James McCourt represented AJB Properties at the Helper City Council meeting on Thursday evening, approaching the council to ask for approval to move the liquor license from the Tuscan in Price to the Helper Hotel.

The council had previously been supplied with renderings of what the outside facade would look like. AJB Properties is currently working with an architect on the interior and finishing touches.

The new name for the location will be the Retro Grande, which McCourt explained is a play on the Rio Grande. As viewed in the submitted photos, there is one that has the brick facade at the front based off of an old roundhouse design to keep in theme with Helper.

McCourt then said they are looking for at least one day per week for operation of the bar to be open while completing the renovations, which are slated to begin in April.

They are waiting on final plans from the architecture firm and then will start working on the building permits. Stipulations were put in place such as marked parking so patrons would know where to go and an ADA accessible entrance.

Currently, McCourt explained that they are also working with an electrical contractor as the building has been sitting vacant for so long that they have had some property removed.

He told the council that they are looking for a tentative opening date for the bar at the end of this year or beginning of 2022. Following more brief discussion, this was approved by the council. 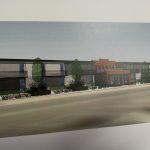 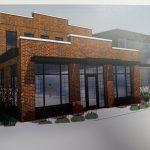