On May 22, the Utah Division of Wildlife Resources hosted its second annual Stewardship Awards Banquet at the Radisson Airport Hotel in Salt Lake City. Stewardship awards recognize outstanding citizens, educators, landowners, policy makers and conservationists for their contributions to wildlife. Winners are selected from a large pool of candidates from around the state. This year, award winners included Debbie Pappas, Director of Second Chance Wildlife Rehabilitation in Carbonville, and the Preston Nutter Ranch with Blair Eastman, ranch manager, accepting the award.

Pappas was presented with the Compassion in Action award for her life’s work in caring for sick, injured and orphaned wildlife. Pappas founded Second Chance Wildlife Rehabilitation 20 years ago. Her facility was entirely self-funded in the beginning years. As time has gone by, private donors have helped share the costs of veterinary and medical care incurred in the care of her patients. The facility receives no government funding. The wildlife medical services encompass nine counties in the state, the largest of any Utah rehabilitator.

In the course of a year, Pappas will drive as many as 20,000 miles in her personal van to pick up animals that have been called in by public safety dispatchers, wildlife officers and the general public. For more information, visit Second Chance Wildlife Rehabilitation on Facebook.

The Preston Nutter Ranch was recognized as CWMU/Landowner Association of the Year. Situated on the Tavaputs Plateau, the Preston Nutter Ranch includes year-round critical habitat for many wildlife species, including elk, deer and the greater sage-grouse. Wildlife habitat enhancement has been a primary objective of the ranch.

Over the past 15 years, the ranch has conducted numerous habitat treatments at their own expense. They are an active participant with the DWR in wildlife research and management. The cooperative wildlife management area, bearing its name, has proven to be an outstanding partner with the division and Castle Country community. 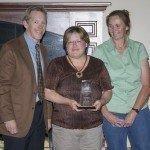 Debbie Pappas receives the Compassion in Action award from the DWR. 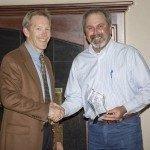