Yep, it is rodeo season again. At the Southern Utah Rodeos in Hurricane on Feb. 24 and 25, Graycee Mills and Byron Christiansen won the all-around titles in their age group competitions.

Fifth-grader Mills, daughter of Jimmy and Emily Mills of Castle Dale, competed in the Utah Five and Under rodeo, winning first in girls’ goats, second in pole bending and fourth in barrel racing on Friday. Then, on Saturday, she added points by roping first in breakaway, second in both girls’ goats and poles and third in the barrels. This gave her the lead in all-around points for the weekend and also placed her third in the state all-around standings. 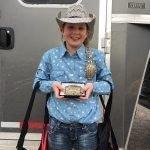