Carbon Dinos AubreeAnn Sicilia and Taci Tapia both competed in the girls’ high school state wrestling tournament that took place on Feb. 17. Their hard work and perseverance was impressive to their coach, Paul Neece, who wished for his team members to be recognized.

Neece stated that the girls both competed hard and with some of the toughest competitors in the state. They ended up placing third with both making it to the semi-finals before being defeated. All year, Sicilia has been competing against boys, which is tough for competition.

“I’m proud of them, proud of their accomplishments on what they’ve done for girls’ wrestling,” Neece stated.

For Carbon High School, Tapia and Sicilia are the only two girls that competed. There were a couple of other girls initially on the team, but were unable to compete this year due to various reasons. Neece stated that he anticipates the number of girls in wrestling to rise as the Utah High School Association is going to recognize girls’ state next year. 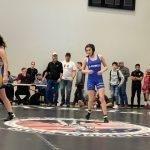 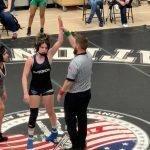