On Friday afternoon, two vehicles were traveling northbound on Highway 10 in Emery County when a two-car accident occurred, resulting in two individuals being transported to Castleview Hospital in Price, according to information from Utah Highway Patrol.

The first of the two vehicles had stopped to make a left-hand turn and the second, not seeing the first, hit the back of the vehicle.

One automobile was pushed to the shoulder of the road due to the impact and the other blocked another lane of traffic afterward.

The passenger of the front vehicle and the driver of the second were transported by ambulance to Castleview Hospital.

Both vehicles sustained significant damage as a result of the accident. 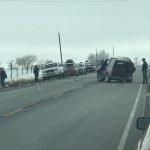