A two-vehicle accident involving a sedan and a U-Haul occurred just after two p.m. on North Main Street in Helper.

It appeared the black Nissan Maxima struck the back of the driver’s side of the U-Haul. Significant damage was sustained by both vehicles. There is no word yet on how many occupants were in the vehicles when they collided and their conditions.

Utah Highway Patrol and Helper City Police were on scene controlling traffic and assessing the damage.

More information will be posted when it is made available. 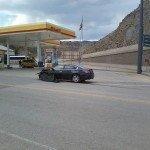 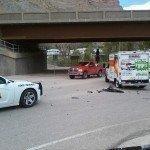