Dean Nosek has been a pastor for 46 years of his life. For most of his career, he has been located in various areas of Minnesota. Hoping to be closer to family, friends and the United Methodist system, he relocated to Utah and Price’s own United Methodist Church.

Nosek is a proud father of eight. His first wife, who passed away, blessed him with his first four children; two of whom were twins. He then remarried and was blessed with four more children. He has an equal amount of male and female children.

A self-proclaimed social butterfly, Nosek states that one of his favorite parts of being a pastor is the variety of things to do.

“If I have a funeral, there’s not too long before a wedding or baptism,” Nosek said. “I love kids, I love youth, adults and old people. I love getting out and mingling; enjoying people.”

Nosek also explained that he’s always been a scholar and researcher, so he truly enjoys the studying and researching aspect of being a pastor. Nosek hopes to bring a spirit of joyful inquiry and a different perspective to the community. Having completed most of his ministry work in bigger cities, it is a culture shock to Nosek to have moved into such a small area but he looks forward to the change and any challenges that may present themselves.

Another thing about Nosek that people may not know is that he is a fan of music and also plays the guitar.

“I like leading children with my guitar and singing,” Nosek explained.

Nosek is also an avid reader and hopes to create a close relationship with the Price City Library, located conveniently across the street from the church and can be seen from his office window. To contact the United Methodist Church for service information, call (435) 637-0127. 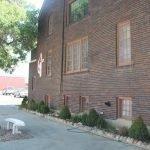