Some of the cast members of the whodunnit-murder mystery “Clue” opening this weekend include (L-R) Danielle Simmons, playing Yvette the maid; Braden Nelson, Wadsworth the butler; and Patty Paulk, Colonel Mustard.

It’s a dark and stormy night, and you’ve been invited to an unusual dinner party. Each of the guests has an alias, the butler offers a variety of weapons, and the host is, well… dead.

“Clue” is the whodunnit-murder-mystery play opening for one week, Oct. 7-10 in the Geary Event Center at 7:30 p.m., with social distancing and masks required. It’s Utah State University Eastern’s first production of the 2020-21 theatre season. USU Eastern student night is Wednesday, Oct. 7, with free admission for USUE students with current student ID. Seating is limited to 140.

Based on the cult-classic film and the popular board game “Clue,” it is a madcap comedy that will keep patrons guessing until the final twist.

The iconic oddballs in the production are given the aliases of Scarlet, Plum, White, Green, Peacock and Mustard as they race to find the murderer in Boddy Manor before the body count stacks up.

Directed by Corey Ewan, Ph.D, the play takes place in 1954 in a Washington, D.C. mansion during the “McCarthy communism witch hunt era.”

Tickets can be purchased online at https://www.eventbrite.com/e/clue-on-stage-tickets-122834103109 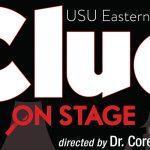