The USU Eastern Spirit Squad has made quite a name for themselves not only here in Utah, but on the national level. They have spent a lot of time studying, practicing and fundraising to be able compete at the national tournament in Anaheim, Calif.

The cheer team has been working hard to perfect new and challenging stunts in the “Small Co-ed Jr. College” category. Execution points are gained by jump combinations, pyramids, stunts and tumbling. Showmanship and school representation effect the final score. Last year, the cheer team placed fourth and members are hoping for a higher placement this year as they compete against new competitors.

Last year, the dance team took third overall in the jazz category, beating Sacramento City College. They were narrowly defeated by .02 from Fullerton College, which took second, and Orange Coast College, which has taken national championship in the jazz category for the past two years. The dance team’s focus this year has been primarily in their jazz routine, working technique and stylistic movement that can hopefully make them stand out from their competitors. The dance team will work to defend their consecutive, two-time national hip-hop title.

Emmett the Eagle will also be competing this year in the mascot category. Emmett will have to perform a skit in under two minutes, engaging the crowd and creating a fun atmosphere. The mascot category is not separated by college divisions, so Emmett will have to battle it out with DIII, DII and DI schools. The last time Emmett competed, he placed second to Boise State’s Buster the Bronco.

“We have been working morning and night to create a skilled/fun routine to compete with. Our team has had a lot of fun this year and we cannot wait to get to Anaheim,” said Megan Mower, a junior on the cheer team.

Come support the USU Eastern Spirit Squad as they showcase their national routines Wednesday, Feb. 12 at 6:30 p.m. inside the BDAC gymnasium. They will be competing at the United Spirit Association’s College Classic in Anaheim, California on Feb. 15-16. You can live stream their preliminary and finals competition through Varsity TV. 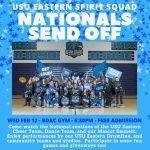