The USU Eastern volleyball team traveled to Sheridan, Wyom. for a tournament throughout the weekend.

The team started out against Laramie County Community College on Friday. The team struggled to gain footing in the matchup, dropping 3-0 to Laramie.

The team came out better in a game later that day against Lake Region State College and grabbed a 3-0 win. The team finished with a 25-20, 25-18, 25-13 victory. Ali Joslyn grabbed 12 digs in the game and Renar Fafard had 11. Madison Taylor, Abbey Braaten and Meghan Jorgenson helped with kills during the game, earning 6, 5 and 4, respectively.

On Saturday, USU Eastern took on Central Wyoming College. The team fell in the first match and was not able to regain momentum throughout the game, leading to a 3-0 loss.

USU Eastern will look for a win against Pima Community College on Friday. 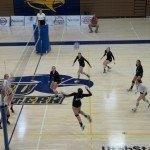