The USU Eastern soccer teams traveled to Western Texas College to compete in matchups over the weekend.

The men played on Friday, tying against the Texas team. Dylan Mcillece protected the goal for USU Eastern. 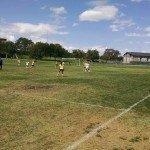