Jordan Packer, a welding student at Utah State University Eastern, took third place at the WorldSkills Special Edition welding competition held last month in Cleveland, Ohio. In addition to winning a bronze medal for the United States, Packer also won the “Best of Nation Award” by achieving the highest score of any US WorldSkills contestant in his respective competition.

Packer, a welding major from Provo who has been a competitive welder since his sophomore year in high school, faced off against 20 other competitors, representing their countries over the 20-hour contest that took place over four days. Each participating nation is allowed to enter a single contestant.

“I have been training for this competition since August of 2021,” Packer said. “Before that, I had to win the state competition and do well at nationals to even be invited to compete in the trials process. The trials process is invitation only and is what selects the sole competitor to represent the United States at WorldSkills. It’s an eight-month long process to even get to represent the U.S.A.”

Packer’s bronze medal finish marks the first medal won by a United States welding competitor at WorldSkills since 2013. He scored 726 of a total 800 points, placing just seven points out of first place, a difference of less than one percent.

“We could not be prouder of Jordan and his accomplishments,” said Greg Dart, senior associate vice president of USU Eastern. “Jordan represented Utah State University Eastern – and really, the entire nation – unbelievably well. This is just one shining example of the type of training and instruction that takes place on this campus every day.”

Having seen Packer’s progress in the welding program, instructor Austin Welch is extremely proud of Packer.

“I think any teacher’s dream is for ‘the student to exceed the master,’” said Welch. “That’s very obviously the case with Jordan. His welding skills are literally world-class, as is his work ethic, dedication, humility and patriotism.”

The competition and its result marks a storybook ending for Packer’s competitive journey at USU Eastern that started nearly two years ago at the 2021 SkillsUSA Utah Skills and Leadership Contest, which he won. Packer put his life on hold to fully dedicate himself to ensuring that he performed at his highest potential, practicing between 60-90 hours per week in preparation for WorldSkills.

“I put in an average of 90-hour weeks and in the few weeks leading up to the competition 18-hour days were normal for me,” Packer said. “This competition is for the best welders in the world, and you have to train harder than regular Olympians. Unlike the Olympic athletes, welders only get one shot to compete on the world stage. All the training and years of work comes down to 20 hours in a welding booth by yourself. If you mess up, there aren’t any second chances.”

After putting other things on hold, Packer now looks toward what is next. Although nothing is yet set in stone, Packer is in the process of launching his own welding business and may look to pursue a bachelor’s degree in welding engineering. Packer credits his time at USU Eastern for shaping his trajectory and helping him achieve his goals.

“I would not be here without the incredible staff at USU Eastern,” he said. “Especially Austin, Jake [Clement] and Jeremiah [Garcia]. They have pulled many late nights working with me and have gone above and beyond to ensure that I had everything that I needed for my success. Your inner circle determines your success and these three have been my inner circle since day one. They have stuck with me through all the hurdles, and I attribute much of my success to the incredible welding instructors and program at USU Eastern. USU Eastern is what higher education is about and I am extremely proud to call it my school.”

Whatever it may hold, the future is undoubtedly bright for Packer who, in his own words, is “just getting started.” 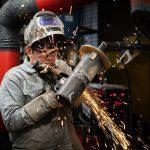 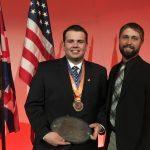 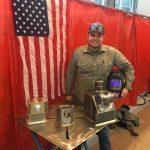