The USU Eastern dance and cheer teams traveled to Anaheim, Calif. this past weekend to compete in the United Spirit Association Collegiate Championships. The dance team, defending hip hop champs from last year, emerged victorious in the competition once more to defend its title. The team also had success in its jazz routine, placing third, just 0.2 points behind the second-place finishers.

“Hard work pays off,” head coach Brandi Johansen said. “These ladies are so inspiring, on and off the dance floor. The love they have for each other can not only be seen when they dance, it can be felt.”

Johansen also commended the team’s academic achievements. “They’ve received the highest GPA in female athletics while taking rigorous courses,” she said. “I couldn’t be prouder. I am so lucky to be their coach.”

The cheer team placed fourth in the show cheer competition over the two days. “They worked very hard for this great achievement. We plan on continuing to work hard to face the competition next year and come back even stronger,” said head coach Kelley Bradley. “I can’t wait to see what the future holds as we continue to build the program.”

Coming up, the community will have the opportunity to celebrate with the national championship dance team when it hosts its annual concert. The team will be performing never-before-seen routines at 7 p.m. on March 29 and 30 at the Carbon High School auditorium. The community is invited to attend and support the hard-working teams. 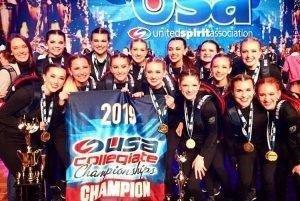