Jordan Packer of USU Eastern recently competed in the American Welding Society USE Weld Trials, having first been selected as USU Eastern’s contestant through competitions with classmates, and was successful in earning second place.

Packer’s next step was to win the Utah SkillsUSA Welding Competition that took place last year in order to compete at nationals. Following, the WorldSkills contest committee invited the top 100 contestants from the 2019 and 2021 national SkillsUSA contests to participate in the USA trials.

It was explained that nationals features both a secondary and post-secondary level, with the top 25 from each division being invited from both years. The contestants that accepted competed in the USA Pre-Trials, where they were tasked with submitting projects to the contest committee. From there, the pool was narrowed down to six.

The top six were narrowed down to four in January and those chosen recently participated at the final competition to determine the U.S. contestants’ overall rankings. This also served to test the U.S. contestants against their Canadian counterparts.

From there, the top ranked U.S. contestants will represent the United States at the WorldSkills in Shanghai as the sole contestant in the welding competition. Packer competed against former gold medalists from the 2019 and 2021 national competitions. USUE shared that there is not a higher level of competitive welding. 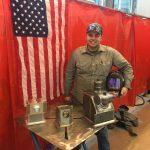 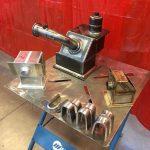