Officers of the Utah Highway Patrol (UHP) paid a special visit to Carbon High School (CHS) on Thursday afternoon to reward students for their good behavior.

The officers took the time as the students left and returned to the campus during their lunch break. Troopers Jason Cosby and Chris Pugliese were joined by Sergeant Gary Riches to award popsicles to the students that were wearing their seat belts.

Students that were found traveling without wearing their seat belt were given a reminder from the officers.

“With graduation just around the corner, we wanted to emphasize the importance of properly wearing seat belts as well as remind the students to please be safe,” said Trooper Cosby.

Trooper Pugliese also observed an improperly restrained child during the event and educated the parents on how to properly secure the car seat. The Utah Highway Patrol Price Section wished to thank R&A Market as well as Tire King for their generous donations that made the event possible. 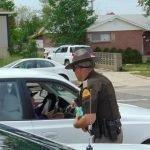 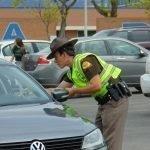