The marshal remarked that he appreciated the commissioners giving him the forum to recognize and present to Wilson, stating that he did not feel that it was fair to drag him to Salt Lake City for a plaque. He was joined by the chief deputy and section manager.

It was stated that Wilson’s legacy is proof of the quality of people and workers that come from Carbon County. Wilson stated that the business has been good to him and he has traveled throughout Utah as well as parts of Nevada and Colorado thanks to it.

The commissioners were thanked by Wilson for their support and allowing them to have a license to work in Carbon County before Wilson was presented with his plaque. 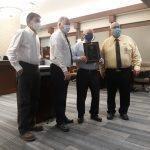 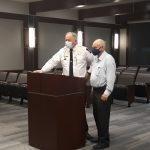 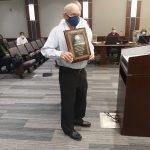