Sixty-two of Utah’s brightest young farmers and ranchers (YF&R) recently traveled back east to our nation’s capitol to visit with Utah’s congressional delegation. The trip, which is usually taken every four years by the YF&R’s, was a success in every sense of the word. There were 25 County Farm Bureau’s represented on the trip that mostly consisted of young married couples who are involved in an agricultural enterprise and have a passion for agriculture.

While in Washington, D.C., participants were able to visit both of Utah’s senators as well as all four representatives. At each visit, different couples were assigned an agricultural issue to discuss with their congressman for a few minutes. Prior to meeting with Utah’s congressional delegation, the group met at the American Farm Bureau office headquarters and visited with members of the American Farm Bureau staff. Staff members briefed the group on American Farm Bureau priority issues such as the Clean Water Act and proposed expansion by the EPA, Farm Labor/Immigration, wild horses and the Endangered Species Act, public lands, transportation, government overreach and biotechnology.

Each issue presented was prefaced by a personal story of how these priority issues impacted agriculture in Utah and particularly how these issues affect the farms and ranches of Utah’s young people involved in agriculture. Time was given for each congressman to respond and discuss what they are doing to protect and enhance the future vitality of Utah and American agriculture. The format of these visits was met with genuine respect from both the participants and the congressmen. For most of the participants, this experience was a first and a unique opportunity to be involved with meeting of their congressman in such a personal and intimate setting.

Visiting with Utah’s congressional leaders was especially impactful on Jeff and Jennie Christensen of Price and Colton Grange of Huntington.

“Jennie and I were impressed with our leaders’ grasp of the issues that currently affect us in agriculture and those that could impact us in the future,” Jeff said. “We also realized that we need to make sure that fact is never lost due to inaction on our part.”

In a thoughtful gesture as Senator Hatch was finishing up his remarks and visit with the group, he presented each young farmer and rancher couple with an American flag that had hung over the United States Capitol Building.

In addition to the training and the congressional visits, participants had the opportunity to visit some of the most historical places in and around Washington, D.C. including Mt. Vernon, the Holocaust Museum, Ford’s Theater and more. Especially meaningful was the Farm Bureau’s visit to Arlington National Cemetery where a group of young farmers was able to place a wreath on the Tomb of the Unknown Soldier. Several of the farmers and ranchers were present in the Capitol Rotunda when Israeli Prime Minister Benjamin Netanyahu passed through, having made a speech to Congress earlier that same day.

“Going to Washington, D.C. was an exceptional experience. It was inspiring to learn what incredible men our founding fathers were and how the process of liberty they established still works today,” Jennie said. “It reminded us that we all have an important role in that process and all need to hold ourselves to that same standard. If we let ourselves be heard, we can make a difference.”

The unique opportunity of being in Washington, D.C. to visit Utah’s congressional officials and the historical sights, learning first-hand about our nation’s form of government, is one that each participant will not soon forget. For most, the experience was an once-in-a-lifetime event. To travel with other young couples that have a similar perspective concerning the future of agriculture was truly life changing for many of the participants.

“This was an incredible trip. I learned that we, as farmers and ranchers, have to stay actively engaged in the political process in order to make sure the needs of Utah agriculture are heard and understood,” said Meagher McConkie, State Young Farmer & Rancher Committee Chairman. “It was really impressive to see all the work that Farm Bureau has done to build relationships with our representatives and senators. I now have a better understanding of how important it is for us to have a personal relationship with our congressional officials and their staff to be able to inform them of issues with regulations, laws and events that impact our farms and ranches.”

Utah Farm Bureau is an organization committed to freedom and a participatory form of government. It is committed to making this meaningful trip possible, but it could not be done without some very generous sponsors including Western AgCredit, Utah’s Own, Salina Marketing, Norbest and Custom Ag Solutions. Jeff, Jennie and Grange would especially like to thank Carbon County Farm Bureau and Emery County Farm Bureau for their generous donations. 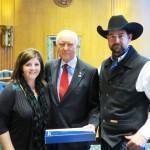 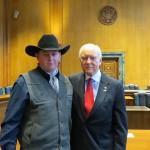