Around 4 p.m. on Tuesday afternoon, a Ford Explorer SUV hauling a trailer was involved in a rollover accident on Highway 10.

According to the Utah Highway Patrol, the vehicle was traveling near mile marker 55, just before the Cleveland junction when the accident occurred. The trailer started to whip back and forth, causing the driver of the SUV to lose control. The vehicle flipped over the guard rails, separating the SUV and trailer. The trailer continued off onto the right side of the road, rolling over and landing onto its top. The trailer remained in the right lane. The SUV and trailer were totaled in the accident.

A couple traveling to East Carbon were inside the SUV and received only minor cuts and bruises. No alcohol or drugs were involved in the accident.

Travelers did experience minor traffic delays while authorities directed traffic around the scene. 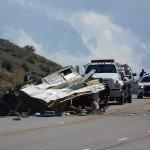 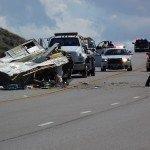 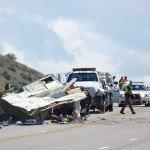