A couple of years before the pandemic, the family of Archie Lee Jeffs submitted an application for him to be chosen to go on an Honor Flight. When the pandemic hit, the flights were suspended for two years. When Jeffs’ name was chosen and it was almost time for departure, he was told he had the privilege of being included in an Honor Flight that left Salt Lake City on May 31.

Each veteran needed a guardian to attend with them. The guardians had to be between the ages of 18 and 70 and could not be a spouse or significant other. Jeffs’ guardian was his oldest son Tyler.

Once in Washington D.C., they were able to visit various war memorials. It was special for Jeffs to find the names of some of his friends who lost their lives in Vietnam as well as one who went missing in action. “They are memorials for a reason; it is important that we remember because they have paid for it, some of them with their life,” Tyler said.

At every place they visited, they were met with signs and students who thanked them for their service. The flight returned home the next day on June 1. This homecoming was very different from the homecoming from Vietnam. As they disembarked from the plane, a band was playing, there were flags and balloons, and Jeffs’ entire family was there to welcome him home.

Jeffs was drafted in July of 1966 and attended basic training at Fort Lewis, Washington. He left by boat from San Francisco in July of 1967 and served for one year in Vietnam as a machine gunner on an armor personnel carrier. Vietnam veterans were not always welcomed home warmly and this honor flight helped to numb those negative feelings. 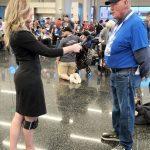 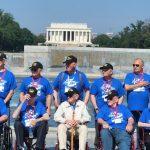 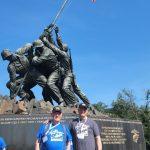 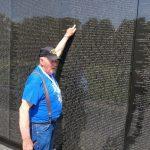