Ferron Mayor Trent Jackson welcomed an overflowing crowd to the Field of Flags to honor veterans from the Vietnam War on Saturday. The event was opened with a prayer, posting of the colors, a 21-gun salute, “Taps” and the Pledge of Allegiance. The crowd was then asked to remove cover and bow their heads to give a moment of silence for those who lost their lives or loved ones in the 9-11 attacks on the World Trade Center.

The first speaker was Mack Huntington, who served as a 1st Lieutenant in Lon Bien during the war. He gave thanks for the fitting salute to Vietnam warriors. He next expressed sympathy for those with lingering physical or psychological effects from various aspects of the conflict, including Agent Orange.

Huntington further recalled vets landing on a plane in California on April 6, 1971 and hearing the pilot say, “Welcome home, you are now on U.S. soil.” Vietnam veterans answered the call to serve when service was scorned by many. He also publicly gave thanks to comrades who saved his life from a heroine user and expressed how important their friendship, which has remained over the last 47 years, is. He closed reciting a verse from “Song of the Infantry,” which gave a cry to follow to the ears of every freedom loving American and asked “May God Bless America.”

The next speaker was Lou Sansevero, who also was a commanding officer in the Marines in Vietnam. He quoted lines from “It is Soldier,” which helped to answer the question of many vets, “What was it all for?” For freedom of press, freedom of speech, right to demonstrate, right for a free trial and the right to vote’ that’s what it was all for. Even though many have been forgotten by their country, Sansevero said that they still love their country even though the country failed to love them back. Many still suffer from emotional wounds over the last 50 years. He expressed gratitude for the long overdue honor presented to them at this time. He stated that the visual field of 400 flags represented the 2,977 innocent men, women and children who gave the ultimate sacrifice. Sansevero ended his remarks with the Marine corp motto. 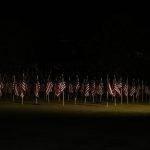 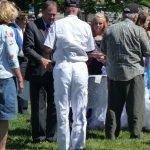 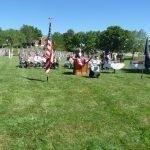 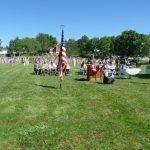 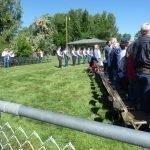 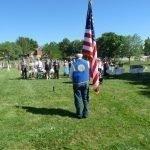 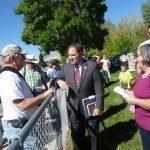 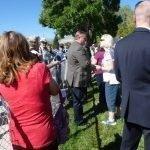 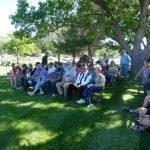 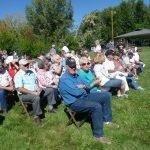 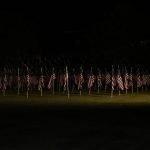