Layne Miller, Price City Councilman and longtime resident, was recently recognized by the Office of the Lieutenant Governor as well as the Utah Commission on Service and Volunteerism with a Volunteer Recognition Certificate.

Miller stated that he received this certificate as a result of attending a multi-day training on how to organize volunteers, which is something that he has always been interested in and has dedicated many years of his life to. That effort was the focus of a job he held with the Forest Service and he transitioned it into his responsibilities with Price City.

“Volunteering has always been an important part of my life,” said Miller. “It started when I was young, in the Boy Scouts, then really expanded when I moved to Price and became interested in rock art.”

Miller stated that no large organization can function effectively without volunteers, which is why they are so important. Miller played a key role in forming the Nine Mile Coalition and the Utah Rock Art Research Association. He leads rock art tours in Nine Mile Canyon, the San Rafael Swell and other areas, stating that if you are passionate, you will never work a day in your life.

“That concept applies to our work as foster parents, too,” Miller shared. “We love kids and firmly believe that if you’re going to help society, you begin by helping the children.”

Miller and his wife have been foster parents for over 20 years. They choose to help local youth through volunteering as foster parents. Miller has taken that idea a step further by choosing to assist in mentoring new foster parents, helping them through the tough times that every foster parent inevitably faces.

Miller expressed his belief that Price City is lucky to have many dedicated, valuable people who support what the city does and are serious about ensuring that it succeeds. One such person he highlighted was Megan Marshall, who voluntarily organizes the city’s parades and assists with the annual International Days celebration.

“Life is better when giving service,” Miller concluded. “You forget your own problem when providing service to others.” 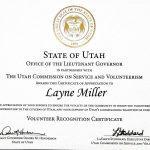