A semi traveling south on SR-96 near Scofield flipped onto its side Wednesday morning. According to Utah Highway Patrol, the accident occurred at approximately 9:30 a.m. near milepost 15.

Police reports indicate that the driver failed to negotiate a sharp curve in the road. The truck was hauling a full tank of water, which flipped and slid across the asphalt and onto the west side of the roadway. During the incident, the vehicle’s cab struck a guardrail. The impact caused the driver to become pinned in the vehicle.

“A medical helicopter did land at the scene,” explained UHP Sgt. Todd Royce. “The driver was extricated and flown to an area hospital with severe leg injuries.”

According to UHP, the driver remained conscious and regained movement of all his limbs following the extrication. 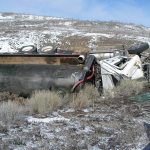 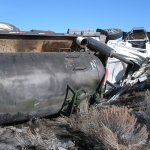