In some areas, heavy rain kept hunters in camp. Those who did venture out found muddy roads and deer that were bedded down and hard to find.

In areas that received less rain—or no rain—hunters found much better success. One example is south-central and southwestern Utah. In some areas, rain poured down. But, in many areas in Utah’s Dixie, rainfall was spotty. Hunters in these areas found bucks—and not just small bucks either.

Teresa Griffin, wildlife manager for the Division of Wildlife Resources in south-central and southwestern Utah, worked over the weekend at a check station between the town of Monroe and Fish Lake. By 2 p.m. on opening day, she and her fellow biologists had checked 12 bucks. Griffin was surprised at the age composition of the deer. Typically, yearlings (deer that are 11Ž2 years old) make up the bulk of the deer taken on opening day. Not this year. The 12 bucks included only two yearlings. Two of the 12 deer were 21Ž2 years old—a nice-sized 3-point and a nice-sized 4-point. The remaining eight deer were all mature animals—at least 31Ž2 years of age.

By the end of the weekend, biologists had checked 92 deer at the check station. Plenty of deer came through check stations in other areas in south-central and southwestern Utah too.

“The deer herds are doing really well,” Griffin says. “It’s exciting to see. And it was fun talking with hunters and hearing about the great experiences they had.”

The experience Covy Jones had is an example of the other side of the coin. Those who faced the tough conditions he did can relate to his experience.

Jones, the DWR’s wildlife manager in north-central Utah, took the opening weekend off from work, to hunt deer with his son. He says he and his son worked hard to get into an area they had scouted ahead of time and found plenty of deer. But the rough weather pushed them back out.

“It’s been a tough, tough hunt,” Jones says of the hunt in north-central Utah. “The weather is just starting to push deer in north-central Utah to their winter ranges. During that transition period, deer can be tough to find. The trees also have lots of leaves on them, and there’s plenty of cover for the deer to hide in.”

The rifle hunt runs until Oct. 25. As Jones looked at the weather forecast, he became more optimistic. “The second weekend might be really good,” he says. “Plenty of deer are out there. They’ve just been tough to find.”

In addition to the reports for north-central, south-central and southwestern Utah above, DWR regional wildlife managers report the following for the remaining regions in the state:

Wood says the number of yearlings versus adults was identical both years: 42 percent of the deer checked were yearlings (11Ž2-year-old deer). The remaining bucks—58 percent—were 21Ž2 years of age or older.

Wood visited with several hunters during the weekend. While some said they didn’t see any deer, most reported seeing more deer, and more bucks, than last fall. “And last year was a good year as far as the total number of deer,” he says.

Randall Thacker, DWR assistant wildlife manager in northeastern Utah, provides the following report for each check station in the region:

“Almost all the hunters were happy with the hunt,” Thacker says. “They were seeing lots of bucks and were passing up little bucks. Most said the hunt was great. The increased percentage of mature bucks in the harvest made them happy. More mature bucks is the result of fewer hunting permits and good deer survival the last three years.”

A total of 37 deer were checked in, which is down from 55 checked in last year. Thacker says the heavy rain was probably the reason for the decrease. “The rain moved in around noon on Saturday,” he says. “Hunters couldn’t get out and hunt much for the rest of the weekend.  Most gave up and went home on Saturday evening or Sunday morning. This will probably result in more bucks left alive on the mountain in this area.”

Thacker says most of the hunters in this area were very pleased with the hunt. “Many commented on how well a reduction in permits is working,” he says. “They said they are seeing much nicer bucks than they used to. We saw a few really nice bucks come out of the area this year. Lots of yearling bucks are around too, but many hunters are holding out for bigger deer. And many of them are finding the bigger deer they’re looking for.”

63 deer were checked in.  That’s up seven deer from the 56 checked in last year.

“Most hunters were satisfied with the amount of bucks they saw,” Thacker says. “They were happy with the opportunity to hunt. Most took yearling deer and are hoping for bigger deer in this area in the future.”

“Most folks commented that they weren’t seeing many deer,” he says, “and what they did see were younger bucks. The weather in this area was warm with only a few scattered rain showers.”
East-central and southeastern Utah

The age composition of the deer was also similar to what biologists usually see during the opening weekend: most of the deer were yearlings.

Wallace says the weather played a big role in how the weekend turned out. “The weather was rough across the region,” he says. “There was lots of rain and fog. That made it difficult to see the deer. And many of the roads were muddy.”

As the conditions improve, Wallace hopes hunting will too. “The mountains are still sopped in,” he said on Oct. 19, “but the skies are starting to open up. If the weather improves, hunting during the second weekend could be really good.” 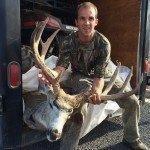 A hunter shows a buck he took on the Pine Valley unit in south-central Utah. Hunting in many parts of south-central and southwestern Utah was excellent during the opening weekend. 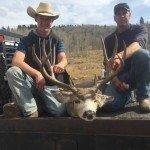 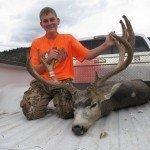 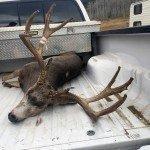 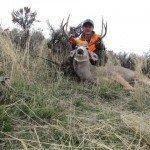 The total number of deer checked at check stations in northern Utah was up from last fall. Sixteen-year-old David Hadley took this buck on the Box Elder unit. 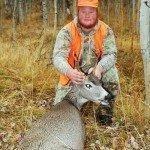 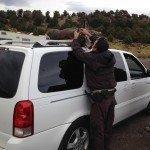 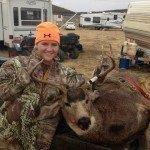 A hunter shows the buck she took in south-central Utah. Hunting in many parts of south-central and southwestern Utah was excellent during the opening weekend.