Residents received a public notice statement in June saying that a survey would be sent out by the United States Postal Service regarding the possibility of a discontinuance of the post office in Wellington City, among other options due to budget cuts in the business.

A meeting for the community to discuss the outcome of the surveys, as well as their opinions and input, with the local management of the Post Office took place August 5.

According to Tony Kline, a spokesman for the post office and postal operations representative for southern Utah, the survey results required at least 66% to agree to discontinue the office. He said 88% of those who took the survey chose to keep the office open with limited hours. Kline said the post office will still be open, but no longer have a postmaster position.

John Mohr, a concerned citizen, said he feels strongly about keeping the post office the way that it is. He and his sons held picket signs that read “honk if you get mail” and “save our post office” outside of city hall as people arrived at the meeting. “We are representing and doing this for our community,” he said. “We have had a postmaster in Wellington for over 100 years and they’re going to get rid of it just like that?”

Mohr has been very outspoken about his concerns for the post office and said he received threats from Kline. “A guy named Tony Kline called the police and threatened to have my truck towed because it was on city property,” he said.
Kline declined ever making such a threat and police did not tow Mohr’s truck. 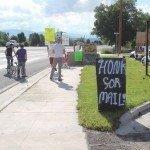 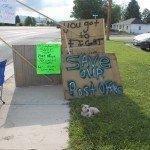 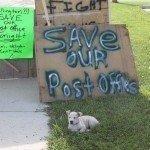 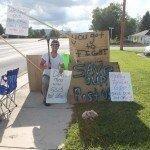 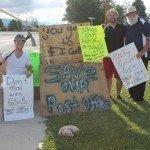 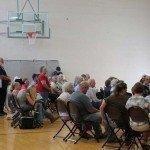