In Utah on May 10, 1869, history was made. This day, deemed the biggest date in railroading history, is when the Union and Central Pacific Railroads joined together.

One of the many statewide celebrations in honor of this event, titled the Spike 150, will take place at the Western Mining and Railroad Museum located on Helper’s Main Street. There will be an arts and museum traveling exhibit titled “A World Transformed: the Transcontinental Railroad and Utah” curated by Daniel Davis, who also gave a presentation kicking off the festivities at the Rio Theater recently.

This exhibit features a great deal of photographs by Andrew J Russell, the official photographer of the Union Pacific Railroad. Jason Huntzinger, director of the museum, reflected on how photography is a very important part of the museum.

“This is a really engaging exhibit to learn about the construction of the Transcontinental Railroad in Utah,” Huntzinger said.

A film, funded in part through an arts and museums grant and created with assistance from Piccolo Productions, titled “Power of Rail” will also be presented. A number of the local school children are featured throughout the film as they were brought to the museum and asked questions on the history. The opening scene of the film features the student asking the question “How did Helper get its name?”

This film will be presented at the Rio Theater during the event at 6 p.m. Senator Dave Hinkins and Carbon School District Superintendent Lance Hatch will speak prior the film.

Food vendors will also be present throughout the day, which will kickoff May 10 at 11 a.m. There will be a live broadcast of the Promontory Recreation, also at the Rio, beginning approximately at noon. The area in front of the museum will be closed off to traffic and there will be an area for those in attendance to sit and enjoy food, games and more.

Railroad prizes from the Spike 150 merchandise vendor will be given each hour, including hats, shirts and pin sets. Ellis Powellson will play railroad themed songs at 5 p.m. on the street with his guitar while, a photo op with the backdrop of the “Champagne Photo” showcasing the celebration of the joining of the rails. An art station for children will begin after 4 p.m. and much more will be available.

This history-centered event is one that the community will not want to miss. 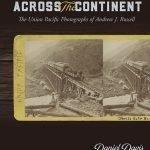 ‘Across the Continent’ by Daniel Davis on the photographer AJ Russell, who was the official photographer for the Union Pacific Railroad, and documented the building of the Transcontinental Railroad. The author gave a presentation at the Rio Theatre to kick off the Spike 150 museum events. 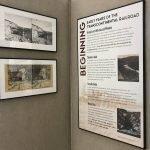 A panel from Utah Arts & Museums traveling exhibit ‘A World Transformed: The Transcontinental Railroad and Utah’ on display Through May 30 at the museum