The investigation and prosecution of crimes involving domestic violence and sexual assault have come a long way in the past decade. However, Donna Kelly stood in front of a large crowd on Wednesday to educate a group on how it can be done even better. Her presentation brought light to age old myths that hamper the investigation of domestic violence and sexual assault crimes.

Kelly presented on the topic of trauma informed response, which is a powerful insight to why victims who have gone through a traumatic situation, such as rape or assault, respond the way they do. A much more comprehensive training on this subject was done for the Emery County Sheriff deputies the day before.

Kelly presented research about how when someone is going through trauma, their brain automatically draws on the primitive part of the brain for self defense to help them through the situation. That defense mechanism allows them to survive, but can often result in disjointed recall, memory loss, emotional swings, guilt and various other responses following the event. Some of these reactions make it seem as if a victim is lying.

Because the brain is in self defense mode during the trauma, the victim may find themselves frozen and unable to scream, run away or even notice details that should be evident. Kelly explained that by teaching law enforcement, prosecutors and advocates about these reactions, the understanding of how to best help a victim becomes more clear. What has appeared in the past to be false reporting now makes sense and can be viewed with a new perspective on why the victim is reacting a certain way.

Emery County Commissioners Jeff Horrocks and JR Nelson were in attendance and took a minute to reflect on why this issue is important to them.

“The Coalition is an outstanding organization and asset in this area,” said Nelson. “I am really glad to continue to take part in the efforts of this organization.”

“I wholeheartedly believe in the efforts of this coalition and what they do for this community,” stated Horrocks. “Both men and women have been helped. It is sometimes hard for men because it is hard to admit that maybe a guy that is my size could be being beat by some tiny little women, but it happens. More men are feeling like they can get help and women are understanding that whether it is verbal, physical, emotional or a combination, they can get help.”

Commissioners donated refreshments at the event and other sponsors included BK’s, who catered the event. Food Ranch donated donuts, Holiday Inn provided a free room for Kelly and many others stepped in with door prizes and other donations to make the event a success. 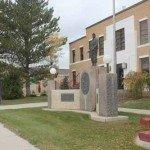 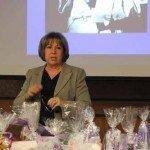 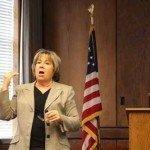